WHERE IT WAS, BUT BETTER THAN IT WAS. THIS RECONSTRUCTION. 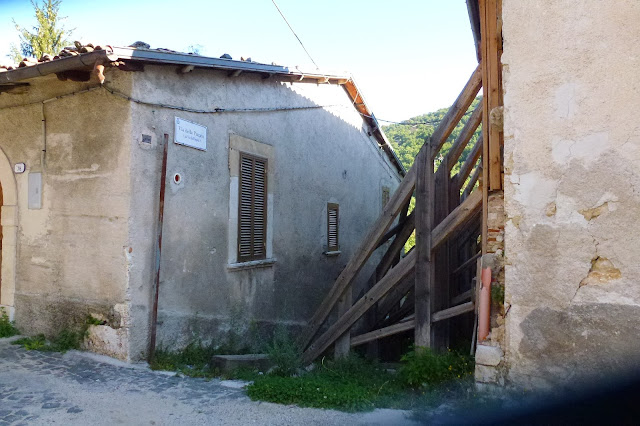 There was many "theoretical" discussions in the territories of the Homogeneous area of the Snow (where Lucoli is included), because the extent of the damage, although significant in some centres, did not reach proportions of widespread collapse and therefore, reconstruction in the same place was never been called into question, in fact the municipalities also limited temporary settlements using the abundant second homes and hotel facilities toprovided hospitality to those who had toleave their homes.
The affirmation "in the same place" or "where it was" was tantamopunt to evoking the magic permanence of the urban layout, able to survive thousands of years of change and a number of catastrophes.
But why automatically extend this "respect" to alla developments, even the most recent ones, even those which were environmentally destructive and impossible to make safe, e.g. buildings on slopes damages by landslides, as the mega-residences in Lucoli? Why redeem them, putting them on the same level as the historical town centre?
In other words, the metaphor where it was but better the it was, which is an automatic reaction in the early post-earthquake stages, at least since the earthquake in Friuli - and thankfully this is also a collective defence against the new towns - risk to involve also the bad parts of the towns which should be call into question during the "rethinking" linked to reconstruction.
However, superficiality and bad faith can reach alarming levels when youpass to the second part of the famous slogan of post-war Warsaw: as it was.
How was what?
Houses devastated by "modern" restructuring, with concrete roofs and balconies that can enhnance a seismic hazard to the highest level? Renovation of historic facades with historical building elements reduced to a poor and meaningless decorum, or embellished by pious hands which remove the effect of the passage of time by "modernising" them? The public area of historical town centres abandoned years ago, along with the residences, patched-up technological networks, the lack of basic services for the population?
Reconstruction as an opportunity for improvement on the past is not only a legitimate form of compensation for people who have suffered the trauma of an earthquake, but also the only way tomake sense of reconstruction, optimising publica resources.
If this is true then stringent but also innovative design is necessary, able to re-interpret, in some cases for the first time, the fabric of buildings and urban areas as precious historical heritage, but also to vivify them, starting from risk reduction, energy usage improvement, thinking on how mountain areas should now be lived in, the search for new meanings to be attached to public areas and their use by society (see L. Caravaggi, C. Imbroglini, Spreading knowledge of historical Heritage, producing technological innovation and a maintenance culture).
Favour new vital functions.
Reconstruction intended as a process of endogenous urban redevelopment tends to favour actions that will evolve over time, adapting to local limitations and potential, re-defining urban areas in relation to the needs of contemporary life in difficult mountain areas: substantiall seasonal changes, temporary activities, different rhythmes of life outdoors, etc. The topics of the urban area revitalisation projects were based on were: firstly, the system of safe areas and routes, or areas, paths and surfaces related to emergencies which have to play a leading role in the redevelopment, also by virtue of the possible funding. It is easy to see how the development of a resilient system involves the first consistent interpretation of the urban fabric inherited from the past (see O. Carpenzano, Le strategie del progetto urbano per ricostruire e proteggere).