Lucoli, Resilience, and the Kindness of Strangers

Last September I received an email from "NoiXLucoli" telling me about the area around Lucoli (AQ).
I admit I hadn’t heard of Lucoli before they wrote to me. Since then I discovered that it’s just inside the Lazio – Abruzzo border, about an hour and a half from Rome and half an hour from the city of L’Aquila.
As usual I did a quick search and found out a few details. Its population is about 1000 people, its patron saint is San Giovanni Battista celebrated on 24 June, it has 16 districts (if I counted correctly) and it sits at about 1000m above sea level. For those of you who like skiing It touches on Campo Felice which is often the destination of many Romans for their white week snow holiday.
A few years ago I added a page to this blog in which I link to news articles about and related to Abruzzo. On average I add an article once a month – Abruzzo doesn’t feature as often as Tuscany in the mainstream media. If you look at the page Abruzzo In The News, you can see I’ve divided the links into three sections:
I find it very interesting that over a year has passed between my two most recent additions to Travel/Tourism yet in the last month I added 5 articles to the section Earthquake in L’Aquila.
In case you’ve missed it the province of L’Aquila has been in the news a lot lately as a result of the convictions of scientists for giving false assurances before the 2009 Earthquake.
When they wrote to me also referred to the earthquake. After the Earthquake the people of Lucoli created a memorial garden dedicated to those who died. I found it heart warming when they said that many non-Italians helped by sponsoring trees in the garden. People from the United States, Canada, Ireland and Israel contributed. 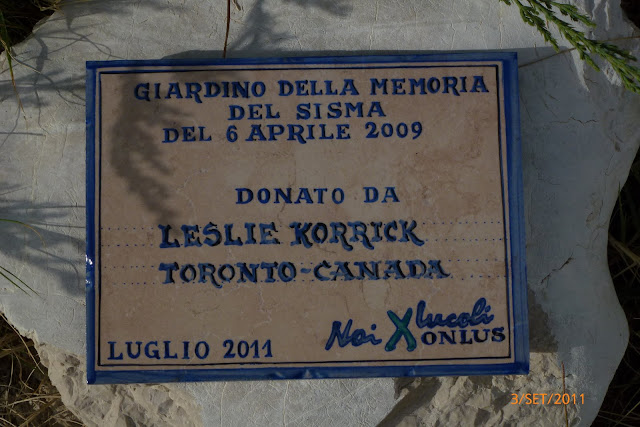 If your Italian is up to it you can read about it in La Pazienza Degli Alberi Ed Il Sospirato Impianto D’irrigazione and also here.
On the blog NoiXLucoli Onlus you can get an insight into life in the region and the things that are most important to the people of Lucoli.
Many of the articles in NoiXLucoli Onlus are written in English. There are posts on local attractions Lucoli Tourism And Its Basic References For Our Foreign Readers,  We talk to our foreign friends of Lucoli and Travel Notes About Lucoli By Gillian & Dan Nevers and posts on geology Middle And Late Pleistocene Glaciations In The Campo Felice Basin.
In the post Travel Notes About Lucoli By Gillian & Dan Nevers, I was particularly taken by the observation:

We did not return to Lucoli until 2010, a year after the earthquake.  The land was still beautiful, although now achingly so, as it was marked by destruction.  Whole towns lay in rubble, and so many buildings were boarded up and closed to inhabitants.

Lucoli is a small community that has a rich tradition and heritage. But being a small community its survival is precarious. The 2009 earthquake was a big blow to the region and it made the lives of many local people so much harder. Even though an earthquake may not have immediate and devastating effects on a community it can still be the cause of prolonged tragedy.
I don’t think more accurate predictions by scientists would ultimately make a difference to the long term effects of natural disasters. Buildings would still collapse, infrastructures would still fail but in the immediacy of the tragedy more lives could be saved.
I’ve had difficulty reaching a conclusion as to whether I think the verdict in the trial of the scientists was justifiable or not. I commented on Alex Roe’s (Italy Chronicles) piece Sentencing Earthquake Scientists: An Unjust and Unjustified Court Decision in Italy and at the time of commenting I felt the verdict was madness.
However I admit that there are layers within layers and although I do not think the sentence is appropriate I think the scientists are accountable if they knowingly gave misleading information.
Did they? I’m still not certain.
But as I said there are layers with in layers and sometimes it isn’t easy or appropriate to apportion blame.
Are those who report the message responsible it they choose not to investigate the complex detail in favour of a sound bite?
Are those who hear a message and rely upon it responsible for not delving into detail?
Is the state responsible for supporting communities in potentially inhospitable locations?
Is God solely responsible since…?
Are those who choose to live in an earthquake zone responsible for their decision to live with the heightened prospect of danger?
This story is complex and I don’t feel I have the right or knowledge to make a just judgement.
There is a riddle I love. It starts with the question how do you eat an elephant? One bite at a time!
Does the Italian judicial system, government and people have the stomach to tackle this elephant and go after all potentially responsible groups?
I’ve more questions than answers I guess.
What I can say with certainty is that it is that when tragedy strikes it is amazing how help and support can often come from surprising sources – I’m thinking of contributions, not only money but also time and effort, that can help restore and rebuild.
Considering this I think the memorial garden at Lucoli in the province of L’Aquila is something well worth visiting.