WHY THIS COMMITMENT TO THE RESTORATION OF ORGAN OF THE ABBEY OF ST JOHN THE BAPTIST? 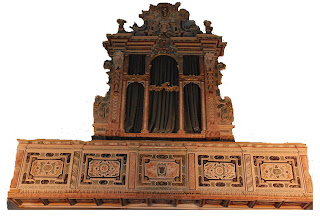 The date of the construction of the organ, 1569 is sufficient to establish the principle that guides our commitment.

If one were to think of the oldest organ in the world, that of the Church of Notre-Dame of Valere in Sion (Switzerland) which was, according to research conducted by Dr. Friedrich Jacob, built between 1400 and 1436, the historical value of this precious art object is immediately evident.
Very few old organs are preserved in Italy. We have the tools made for the Basilica of San Petronio in Bologna (1471-75 Lorenzo da Prato, and Malamini of 1596), a series of Antegnati, all preserved in northern Italy and manufactured in the second half of the sixteenth century, but not one complete organ from the sixteenth century, whose parts are preserved, and which integrate the phonic structure with the mechanics. Among all of these, the organ of Lucoli turns out to be one of the oldest, certainly the oldest in Abruzzo. To these are added other organs built in the seventeenth century (that of the Basilica of Collemaggio in l’Aquila), but in most cases, the tools were significantly compromised and modified by subsequent interventions put in place especially during the eighteenth century.
The instrument of Lucoli, although in poor condition and missing metal and wooden pipes, has not been defaced or altered in a way which has distorted the original structure and its original appearance.
It is very rare to find to find an instrument in this condition. A situation that makes it even more interesting to restore.
To the historic and artistic value of the organ you must add a value which is purely scientific. The restoration will gain invaluable information regarding the building of organs in Abruzzo in the fifteen century.
It should also not be forgotten that the original function and purpose of the organ instrument created and placed in the church was to enrich the liturgical ceremonies with its sound to give praise to God. This will be the first of the functions that will be retrieved once the instrument is restored. Proper decorum and proper solemnity will return to the liturgical ceremonies that regularly take place in the Abbey. Of course, the restoration of the instrument will also promote and encourage concert activity. It has, in fact, two purposes. To revitalize the area with the arrival of the public from the neighboring towns and to provide organists, especially young people, with an instrument where they can study and perfect the literature of sixteenth-century Italian organ musics.
Foreign friends who have known and loved the beauty of the Lucoli land, help us in this work of research funds to restore the organ of the St. John the Baptist Abbey, this could be a great opportunity to aggregate youth and for cultural development.